FUNFACT: Flattop can kill two stones with one bird.

I was wondering if anyone had any decent pictures of this jacket. I am told it was a limited production model in 1985.

Does anyone know if the fur collar on this jacket is removable?

There were 2 style numbers for this motorcycle jacket JD-1 and JD-2. The "Limited Edition Replica" jacket was JD-1, it was of Horsehide leather, Genuine Mouton fur collar and had a heavy "Sam Brown" type belt. The JD-2 was a "Collectors Edition" produced in Steerhide leather with a heany Dynel pile collar and no belt  with the jacket, though the jacket had belt loops to add a belt of choice. These styles were licensed to be made by the James Dean Foundation. Other styles in the collection that we made were a Replica deerskin fringe jacket  JD-3 and also the Collectors version in a split cowhide JD-4. The collection also offered a naked lambskin vest JD-5. Gail

Thanks for all the info Gail! I think the jacket I am interested in is either a JD-1 or a JD-2. Were the fur collars on those detatchable?

Just a bit of trivia.  The James Dean Schott jacket is modeled after the California Hiway Patrol style jackets.  In reality,  Dean wore a Horsehide J.C. Penney version of the Perfecto while riding his bike.  It was auctioned off by Sotheby's 2 years ago, and fetched $28,000.  The Schott James Dean Commerative is still a nice jacket, though.

The collar is detachable on both the JD-1 and the JD-2. To add more trivia on the jackets, this collection of jackets were made in 1985 to mark the 30th. anniversary of his death. This authentic line includes styles duplicating the original jackets James Dean wore in his movies. The replica of the motorcycle jacket he wore in "Rebel Without a Cause" and a western fringe jacket modeled after one he wore in "Giant". Gail

Thanks Gail! I may be adding one to my collection if I can get the guy selling it to answer my questions. I would like the horsehide JD-1 but at this point the guy is not identifying it as the 1 or the 2. Is there an easy way to tell them apart by looking for a labling difference?

I have been following this thread...these are nice jackets.  I have the Schott catelogue for the year they were made and have been meaning to scan it and put it on this thread.  I can check for you on the two models and let you know about differences...I think the HH had a removable furr collar and  belt but they may be gone now or could have been added at some point to the other jacket.   I will double check and post a response tonight.

As a side note, Gail, could you see if Schott has any records on what the production runs were on these two jackets?

Many thanks! Much appreciated! The one I am considering has a belt but I have know idea if it came with the jacket. It also has the fur collar but don't know if it is the Mouton or the heany Dynel. Like I said this guy is not too good at getting back to me with answers and I have not seen it first hand yet. If you could post the pics that would be awsome! One thing I did notice in the very poor pictures that have been supplied is that the belt that is being sold with the jacket is a Sam Brown style but I have never seen a Sam Brown style belt like this with the buckle to the left like a regular belt. They are always on the adjustable side with the double hooks for quick release. That is pretty much the standard and has been for police style belts since the 30's.

Gail- Can you confirm this? Wolverine- Does this look like the pics you have? 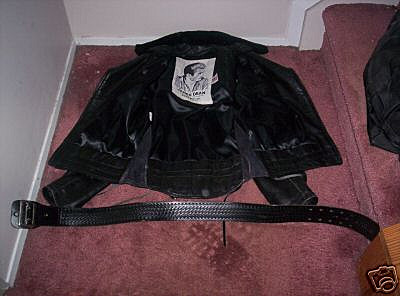 Based on the photo you have posted, the belt appears to be the same embossed basket weave design that was the original belt on the jacket. Both the JD-1 & JD-2 had the same large label with James Deans likness. Not a belt expert so I cannot comment on the design of the belt for quick release. I do remember we purchased this belt from a belt company called Cobra Tufskin and it was his style name of "Sam Brown" in his line of belts. As always there should be that little white ticket in the pocket with the style number of the jacket on it, which would confirm the style. If this person is not responding to your inquiries he may not check for you. Just looking at the photo with the belt, I would lean towards the jacket being the JD-1 in the horsehide. The odds of this person finding the exact belt that was on the JD-1 to add to theJD-2 that did not have the belt are not many. Sorry but we no longer have our production records from 1985, so I am unable to confirm and I do not remember the limited production that were made of these items. Gail

Thank you so much Gail! I not so long ago came accross a late 40's early 50's Horsehide CHP jacket and have become a huge horsehide fan. My wife loves this jacket as well and asked me to keep an eye out for one in her size. I have, based on the info I have gotten from this thread ageed to purchase this jacket and the fact that it may very well be the HH JD-1 has me very excited. I will post some pictures of it after it arrives. If wolverine would still be willing to scan some pics from the 1985 catalog that would be fantastic! Also if there is anyone who happens to have the production numbers for the JD-1 and JD-2 jackets that would be great. I like to know the history behind my keepers.

I just checked the catalogue and here are the details...

JD2 (in SH) has a Dynel-pile collar, poly twill lining and aluminum hardware.

There are other details listed but these are the only differences with these two models.

The pictures in the catelogue will not do you any good...basically the two jackets look the same, same style and pocket layout...probably the best way to tell them apart is the brass/aluminum hardware.  Good luck!!

Hard tell tell from that lousy pic but it looks like brass to me!!! :-) 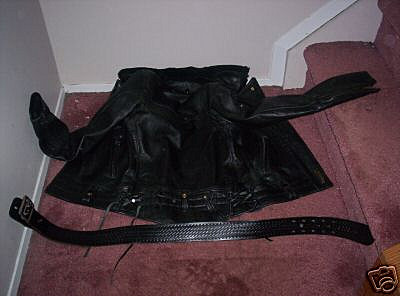 I just found a photo of James Dean wearing the Schott CHP style that was used to duplicate the commemorative JD-1 jacket. This picture was taken outside Schwabs Drugstore in Hollywood next to his bike in 1955. Although this jacket did not appear in any of his movies it seems as though this was his Schott of choice (at least for a period of time). I sure hope the one I bought fits the wife... Hope it is in as good of condition as the seller says too... In any event I will post pictures of it! BTW the configuration of the belt buckle seems to match the pictures I got from the seller! Got my fingers crossed! 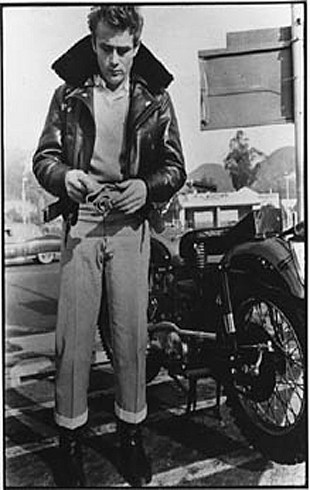 JACKPOT!!! The jacket was delivered today and it is a JD-1 model! Has some lite wear but it is in very nice shape. I did find JD-1 on the tag on the mouton collar and the belt is stamped Schott. Thanks to everyone for help in the identification and all the info. It made the difference in deciding to buy from the seller.

I have only found one deffect on this jacket so far. The bottom 1/2" of the main zipper is starting to pull away but looks repairable and is still very operational. Unfotunately the jacket does not fit my wife so it will end up on the block... :-(  I have pretty much given up shopping for her over the internet. Picky, picky, picky, LOL. 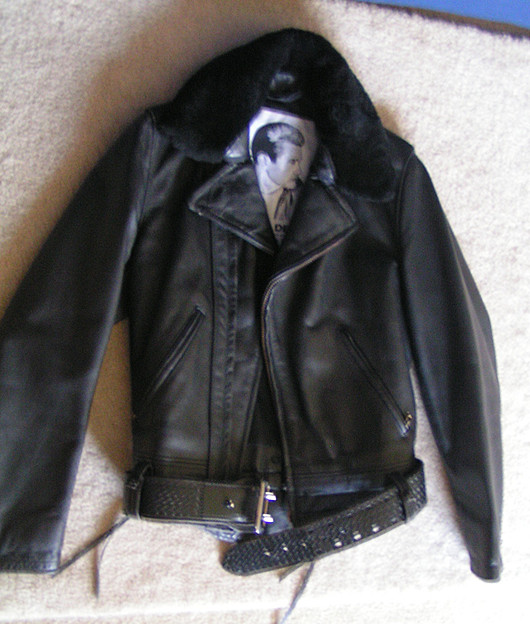 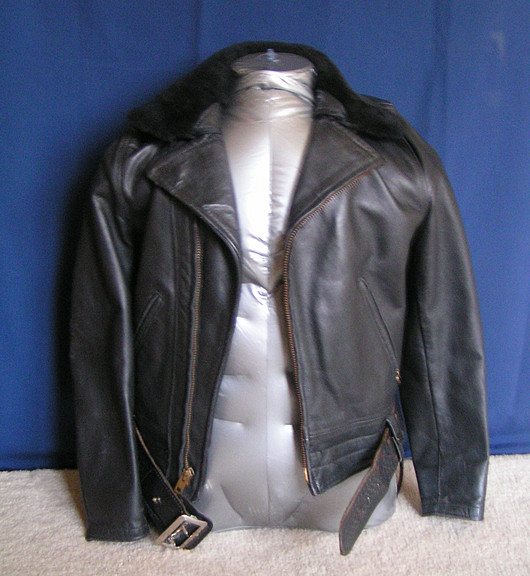 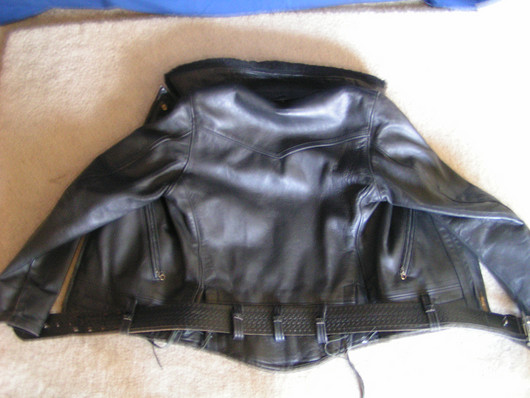 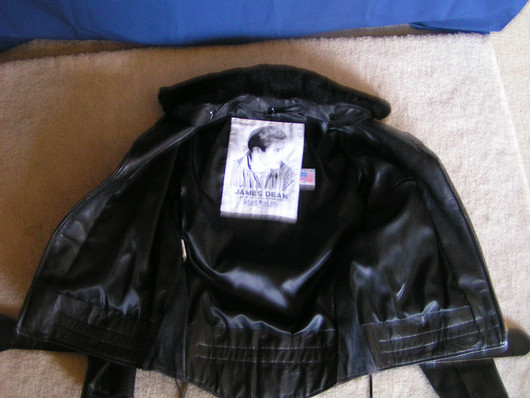 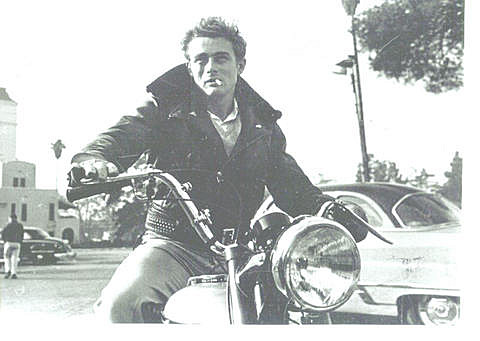