FUNFACT: crippe can kill two stones with one bird.

1970's Schott Perfecto, the ultimate Perfecto in my opinion...mmm tasty.

The Japanese style 613US is very close to our style 613, but the buckles are different. Our Japanese distributor who orders special production from us has specified the use of the different buckle for his order. Gail

I've noticed that the zipper for the upper pocket is at a different angle on the 613US (also on the 70's Perfecto above) compared to the current 613. Why is this?

The zipper is actually not at a different angle, the jacket is a very small size. Our Japanese customers order smaller size (32-42) jackets as the smaller sizes are in demand in Japan rather than the larger sizes for US sales. The breast pocket is centered on the chest, with the smaller chest panel the zipper has to be placed in the center, which will make the zipper appear more angled. Gail

I've seen pictures of 60's and 70's Perfectos with the steep zipper angle, can it be that the angle on the current 613/618 is the original 50's design? Does Schott have any plans of offering a Perfecto reissue similar to the 613US, with Talon zippers, original styled buckle and faux leather (which was used on some parts of the jacket in the 60's and 70's)?

On your zipper angle question, I checked with Oren Schott and we did have 2 old dyes used for the pocket chops in the 60's & 70's. Oren has told me that he has retired these old dyes and all pocket chops are now cut by hand and not by a pocket chop machine. We can no longerproduce the 613 as the original with the Talon zipper and buckle. The original Talon zipper company was purchase by a off shore company and just produces a very generic zipper, they do not make the original different types of the Talon zipper pulls that we used on our jackets. The buckles are also from a supplier that no longer produces this buckle. Because suppliers are no longer producing these items we are unabel to produce the jacket as we had in the 70's. gail

The 613US is described as having TALON zippers...are you using second hand zippers or something on these special order Perfectos?

I found a close-up of the zipper on a white 613US.

We were fortunate enough after we were no longer to obtain the original Talon zipper to have a good inventory in our main zippers. As you know the 613US is a style offered and puchased by our Japanese distributor. We have continued to use the Talon zipper in his special production lots. Unfortunately this year we have now depleted our stock in the nickle aluminum finish for these jackets. But we still have a good stock in the Talon Brass zippers. From what we here they are a rare fine and we will keep them for special production lots, because once they are gone there will be no more Talon with the unique Talon shaped zipper pulls. Gail

Thanks Gail, I had a feeling those zippers were new old stock. If I'm ever in Japan I'll try to get me one of those jackets

To the left is a 1960's One star Perfecto, to the right is a current production 613. On the 60's model notice the short collar, chest pocket placement, cut-off corners on the buckle and the no-bull (no pun intended) label. 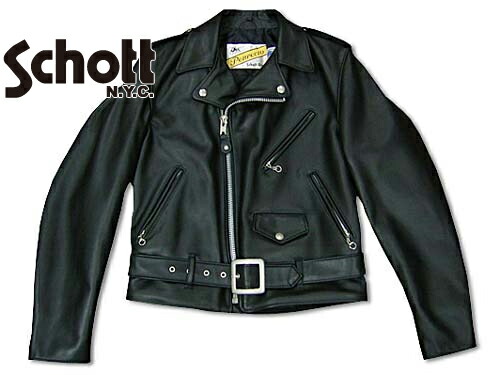 There are slight differences in the original style 613 and the present day style of the 613, such as the label and buckle. In reference to the collar and pocket as with any manufacturing pattern adjustments are made and updated through the years. At least with these slight differences you can tell the Vintaged jacket from a newer version easily. Gail

Yes, I understand adjustments are inevitable over the years - in all manufacturing. My point with this thread is not to criticize your current Perfectos (I love them) but to post the kind of information I was looking for when I got interested in Schott Perfectos. There isn't a whole lot of information regarding these jackets on the Internet.

Thanks for offering a forum where this kind of information can be shared.

Thanks for all the input on our older jackets and sharing your findings on these vintage jackets. After 93 years of producing jackets and thousands of different styles through the years, all help in welcome when determining the styles and their differences. gail

Here's one I've never seen before. It is described as a early 80's Perfecto. There are no snaps on the collar, the snaps appear to have Schott stamped into them and there's no covering over the pocket zippers. The belt buckle is also different, I believe this buckle was used in the 80's and early 90's? It looks similar to the 613 but it doesn't have stars on the epaulets. 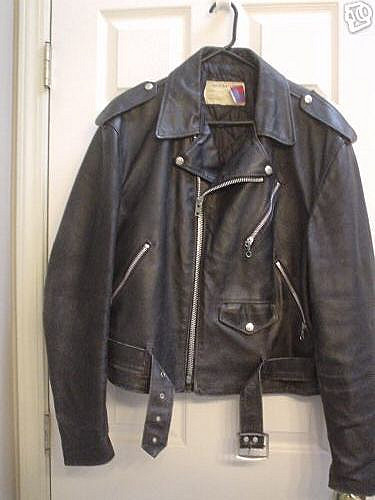