YOU CALL THE SCHOTTS
Message Board - Who ordered the Sea Monkeys? - New Post

Who ordered the Sea Monkeys?

In a 2002 interview with Erik Lobo of Planet X magazine, Harold von Braunhut comes across as the kind of charming old guy who might detain you in conversation a bit too long if you were volunteering at a home for the aged. An inventor and entrepreneur who brought us legions of wonderfully gimmicky toys before he died, at 77, in 2003, von Braunhut holds forth about times gone by, interrupted only when his cockatoo chews at the wire connecting his hearing aid to the telephone.

Von Braunhut was a short, balding man who had the accent that turns “beautiful” into “bee-YOO-dee-full,” and he often cast himself as the guy they all doubted until he showed ’em. In the interview he seems to delight in telling Lobo about his most famous and successful novelty item, Sea-Monkeys. These little critters, you may recall, carry with them the promise of “a BOWLFULL OF HAPPINESS—Instant PETS!” They’re supposed to arrive in the mail, spring to life in water, and soon start horsing around and making babies. According to von Braunhut, the problem with selling Sea-Monkeys early on, ya see, was that “nobody believed it!” He adds, “It’s a little bit like the story of the Wright brothers.”

The accounts Von Braunhut gave of his adventures in American kitsch are consistently winning. Granted, he makes some claims that a skeptic is inclined to independently confirm. At some point in the years after he raced motorcycles as The Green Hornet, von Braunhut worked as a talent agent of sorts. He tells Planet X about a stunt performer he used to manage—the article has von Braunhut calling him “a fella by the name of Henry Lamore”—who would dive from a height of 40 feet into a kiddie pool filled with 12 inches of water. I began to lose faith while trying to verify this doozy, but it turns out that the Internet allows you to watch a man named Henri LaMothe still pulling off this featat 71 years old, as an opening act for Evel Knievel.

As anyone sold by the Sea-Monkey ads could tell you, it was hard to say exactly where von Braunhut was walking on the terrain between truth, embellishment and con. That was his gift. He convinced us to look at the jazz hands and lose sight of the footwork. Von Braunhut’s inventions were not quite what they seemed to be. Neither was he.

If you so much as flipped through a single comic book sometime after 1962, von Braunhut’s ads might have gotten you curious about whether his doodads worked even approximately as advertised. For Sea-Monkeys, the ads portrayed a cheerful family of humanoid creatures bearing crowns of some sort and hanging out by their underwater castle. Mom had blond hair. The fine print said something about “caricatures,” but never mind—the bigger type spun a magical tale of pets that would be “like a pack of friendly trained seals” if you followed the directions. Von Braunhut wrote the copy himself, for at least the first couple decades.

Ads for another von Braunhut invention, the X-Ray Specs (not to be confused with the English punk band X-Ray Spex), promised the power to see through obstacles and showed a guy grinning at a woman in a dress. Again there were words like “illusion”—the effect is created by feathers or grooves in the lenses, von Braunhut’s patents show—but that wasn’t where the average comic book reader focused his attention. In von Braunhut’s most impressive marketing coup, he peddled “Invisible Goldfish." The kit included a glass bowl, a handbook and fish food. That was it. He said they sold out. There was a 100 percent guarantee that the buyer would never see the fish, and I’m 100 percent sure that guarantee never failed. The greatest trick the Invisible Goldfish ever pulled was convincing the world they existed.

How did we fall for von Braunhut’s copy, even as children? It’s hard to remember a prior state of innocence once you’ve come to understand what salesmanship is. When it came to X-Ray Specs, if you were savvy enough to be suspicious, you were also savvy enough to understand that there were naughty secrets your parents didn’t want you to know—maybe this was one of them? Hey, maybe it was worth a buck to find out.

In a lot of cases, von Braunhut’s claims were sort of true. Sea-Monkeys are a variant of brine shrimp, which are harvested for use as fish food and begin their life as cysts that can last for years in a kind of suspended animation if kept in dry conditions. Von Braunhut’s creatures come in packets, looking like white powder. With proper care, Sea-Monkeys can grow to be visible and pretty neat, even if they bear no resemblance to the illustration.

Von Braunhut said that he brought us Sea-Monkeys because of his love of the natural world and the animal kingdom. The Safeway near von Braunhut’s home in Bryans Road, Maryland, would set aside expired bread for von Braunhut and his wife, Yolanda, a considerably younger, chatty brunette. The couple would sometimes buy two or three cartloads of the bread at a time. They were feeding animals at their 70-acre property, which they called the Montrose Wildlife Conservation.

Legions of children enchanted by Sea-Monkey lore have been disappointed to see their smelly little specks die in a matter of days; but others have made obsessive websites and written books about their ongoing Sea-Monkey love. Sea-Monkey eggs went to space with John Glenn in 1998 and came back still good to go. The creatures inspired a (bizarre) short-lived live-action series for kids on CBS in the early ’90s, and they were featured on "South Park" and in a Pixies song. Michael Birnbaum’s Empire Pictures bought the film rights to Sea-Monkeys in 2006 to develop an animated movie.

Von Braunhut was a wellspring of ideas, and some of his novelties relied less on inflated ad copy. He invented those dolls’ eyes that close on their own when the doll is laid down on its back. And he was the man behind the game Balderdash, which tests your ability to call baloney. (I won’t linger on the irony.) If you grew up in America and even dabbled with toys and games, going through the 195 patents that von Braunhut held is bound to bring a smile. 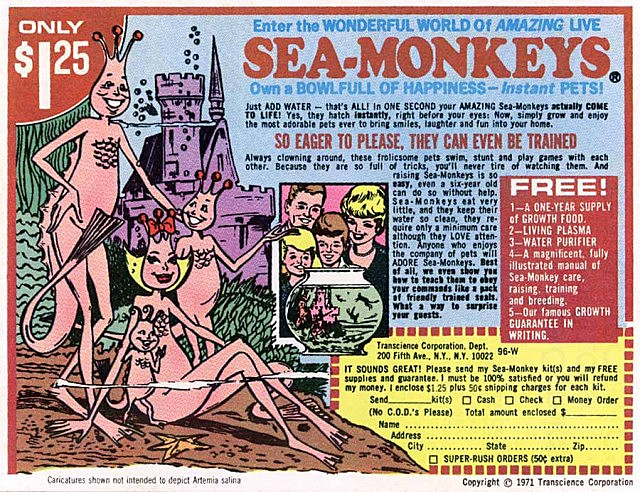 It wasn't unusual to read about Sea-Monkeys in 70's & 80's growing up in the States. However, when someone like myself growing up seven thousand miles away from the US, in a tiny spot on the World Atlas called Macau - to actually lay hands on a Marvel comic, and pay attention to every details of the "junky" ads on the back pages and finally fall for them... was somewhat quite hard to imagine these suckers actually did exist! I can still recall my mum's youngest brother, was the only nut in the family who would dare to expose us to one of the radioactive issues of Godzilla, King of the Monsters' comic (where he made purchase from remains a mystery)! Indeed, we went haywire over our beloved comic book just like any walk of life would! However, my imagination went far beyond that and strangely enough, it landed a better & far more comfortable spot: the pages that brought me the world of Sea-Monkeys, X-Ray Specs and the Grow-Your-Own Venus Fly Traps (after all these years, I'm still having a grudge against Mr. Von Braunhut for not offering foreign orders back in the early 80's when I was only 10)!!