The First Wild One

The Genesis of the Motorcycle Jacket

American ingenuity is responsible for some of the world’s greatest creations. For instance, the cheeseburger is arguably the best all-around food ever and the internet is borderline godlike in its scope. The same goes for a garment that has been adopted by crusty gutter punks, beer-gutted bikers, and yuppies alike: the infallible leather motorcycle jacket. This timeless icon of utilitarian fashion came from the mind of Irving Schott, co-founder of a company now known as Schott NYC, who made history with his iconic asymmetrical jacket design, commonly called the Perfecto.

The scrappy son of Russian immigrants, Irving started his career as a patternmaker for clothing manufacturers in the early 1900s. In 1913, he opened a factory with his brother Jack under the name Schott Bros. in the dingy basement of a tenement building on Manhattan’s Lower East Side. Irving’s first successful products were sheepskin-lined raincoats, which he peddled from door to door. Like any good business, Schott Bros. began to diversify its offerings, bestowing its top-of-the-line coats with the Perfecto brand name. Inspired by Irving’s favorite torpedo-shaped cigars, Perfecto labels were stitched on all of his best leather and wool-lined outerwear.

At the time, motorcycles were probably the furthest thing from Irving’s mind, considering they had only recently become commercially available and he didn’t even know how to drive a car. Irving was introduced to the world of boss hogs by a friend who was a member of the Beck family. The Becks were one of the country’s largest Harley-Davidson distributors and published a popular catalog of their wares that were available at motorcycle dealerships across the country. Schott Bros. began manufacturing outerwear for the Beck catalog in 1920, including early iterations of what would become the modern motorcycle jacket.

Up until this point, there wasn’t a single piece of outerwear on the market sturdy enough to be synonymous with riding motorcycles. Wool jackets lacked the ability to protect the rider from the cutting wind at high speeds, and the leather coats of the day were not designed for the hunched-over, extended-arm posture necessary to drive a motorcycle; this was compounded by the fact that wearing either type of jacket on a motorcycle almost guaranteed that anything in the rider’s pockets would be blown into the air while barreling down the road. The advent of the zipper solved these problems and became a key element to Irving’s design.

Modern zippers—invented in 1913, the same year Schott opened its first factory—were at first prohibitively expensive for clothing manufacturers. But then World War I happened, and the US military found several ways to utilize the newfangled enclosure device, which helped drive down the cost and made zippers affordable to the consumer market. Sensing the potential of this new technology, Irving was the first clothier to put a zipper on a jacket in 1925.

In 1928, after a series of designs, Irving created what is now recognized as the modern motorcycle jacket, using the defining diagonal zipper to fasten the enclosure. The angle of the zipper was essential to blocking the wind, and it ensured that the jacket didn’t bunch up when the rider sat down. It was made out of horsehide, produced for Beck under the Perfecto brand, and sold for a whopping $5.50.

Back in those days, the motorcycle jacket was a total oddity, and those bold enough to wear them probably looked peculiar amid the longer formal coats popular at the time. Nearly everything about Schott’s jacket was designed for utility, disregarding style almost entirely. Two decades later, the design had become more common, and the modern mythos of the motorcycle jacket began to take hold. Its adoption into popular culture coincided with its appearance in films like The Wild One (1953), which depicted an angry and aimless Marlon Brando wearing a tightfitting Schott Perfecto as the leader of a motorcycle gang that terrorizes a small town. By the end of the 1950s, schools across the US were banning students from wearing the jacket, which of course only cemented its status as a fashionable symbol of rebellion. This explosion of popularity resulted in the Perfecto name becoming synonymous with Schott’s motorcycle jacket, superseding the brand’s other designs.

The steely-eyed, -everyone cool Brando perfected continued to be embraced over subsequent decades by icons like James Dean, the Ramones, Bruce Springsteen, and Jay-Z—all of whom donned some iteration of Schott’s black leather jacket. Like blue jeans, it is a classic American garment that has been reinterpreted by virtually every major fashion designer and brand: from avant-garde weirdos like Rick Owens to traditionalists like Ralph Lauren to no-name companies that supply cheap and inferior versions to big-box stores. But there’s still nothing like the original; no one has managed to best the motorcycle jackets made by Schott NYC, who continue to use turn-of-the-century machines and hand-cut leather in their manufacturing process.

This year, Schott NYC celebrates its centennial. We figured it was high time to pay a visit to their factory in New Jersey and share with you the ins and outs of this impeccable American classic. 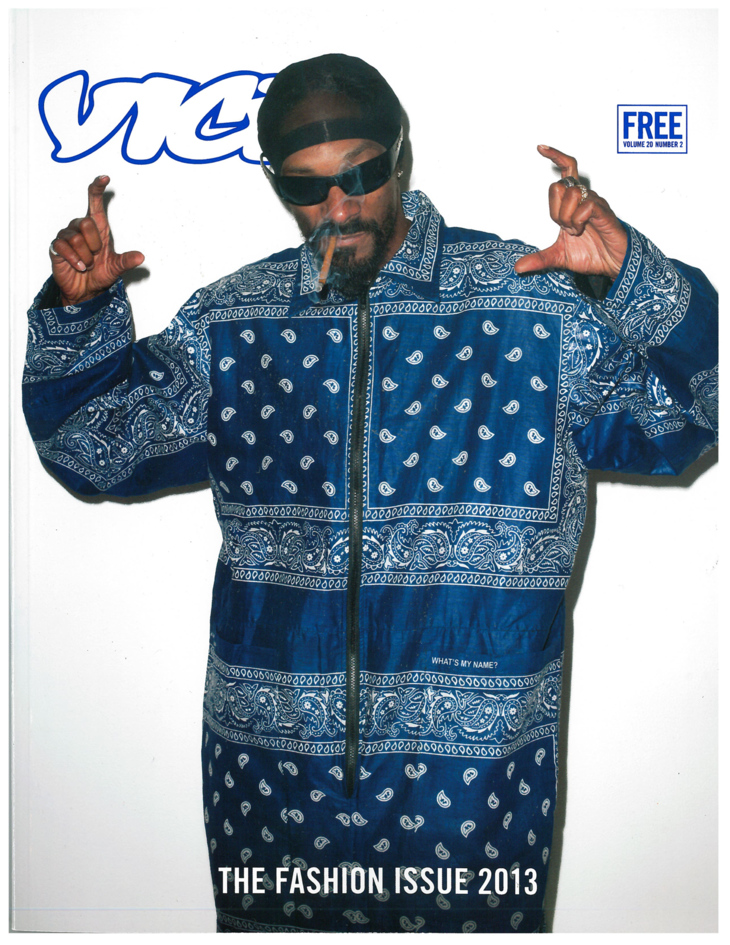 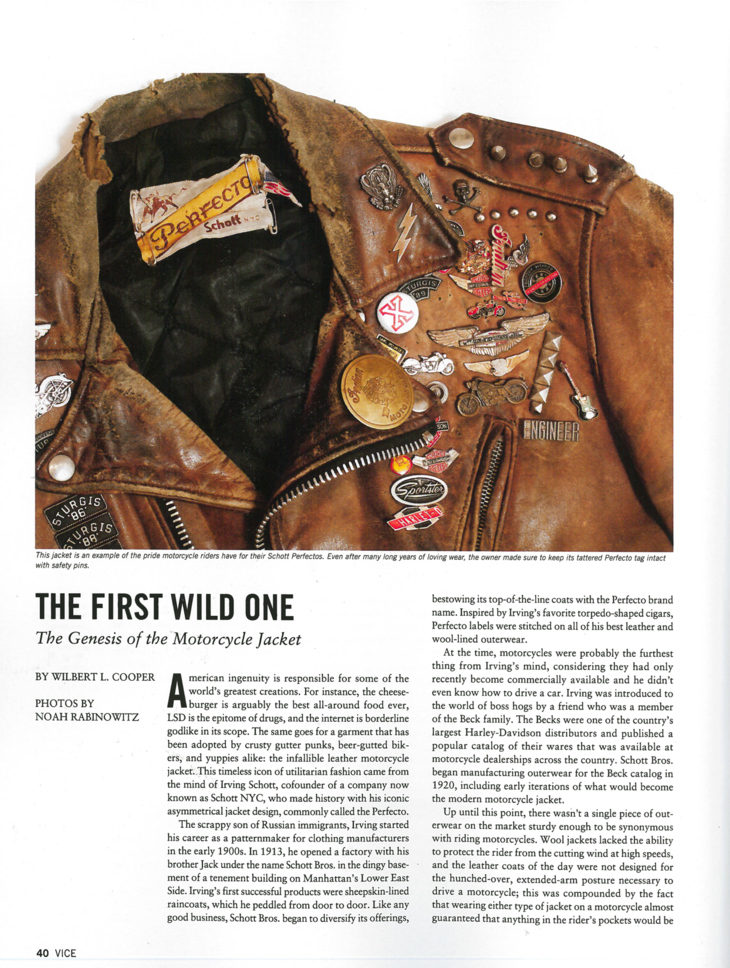 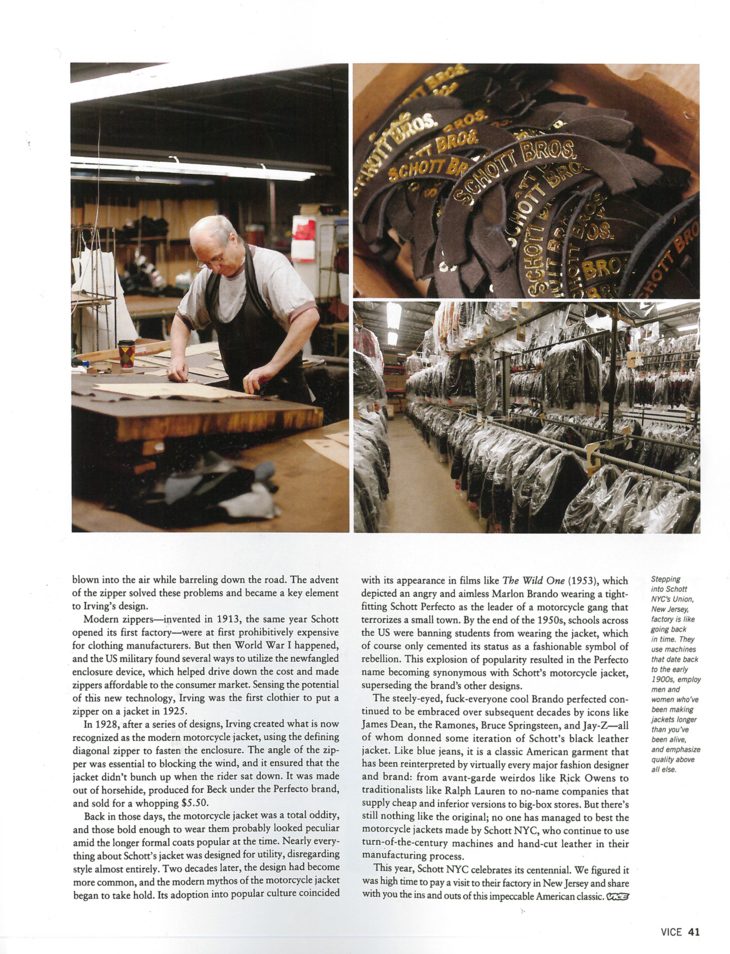 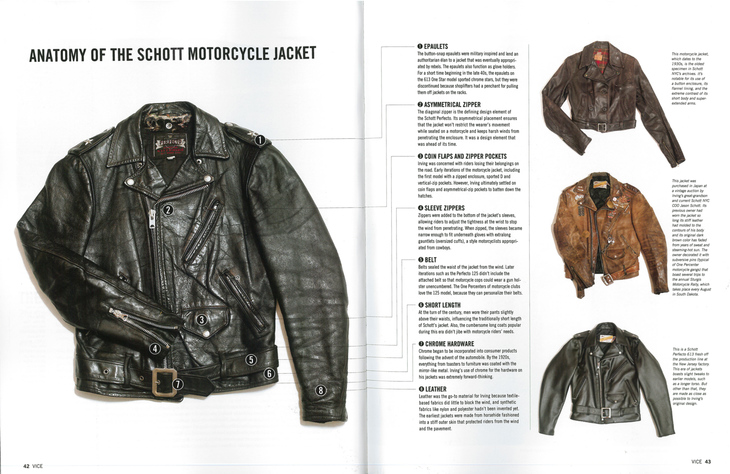 I gained some small gems from this article about Schott, namely the military history of the zipper and Schott’s application of it a dozen years after its invention. Another gem is that the modern motorcycle jacket was created at least two decades earlier than I had thought—1928. And, finally, the 1950s’ banning of the motorcycle jacket in schools was yet another oversight that items being banned typically gain more power: JD Salinger’s Catcher in the Rye and Henry Miller’s Tropic of Cancer... more American classics that tell the authorities of their times: F*ck You.