The Perfecto, a zippered leather motorcycle jacket with a distinctive single star stud on each epaulet (it is sometimes referred to as the “One Star”), might be the most iconic piece of American outerwear there is. Bruce Springsteen, the Ramones, Andy Warhol, the Beastie Boys and Lady Gaga have all worn the jacket, which was invented by the American outerwear manufacturer Schott NYC. James Dean wore his everywhere, helping get the jacket banned in some American high schools for its rebellious connotations. But nobody is more identified with the garment than Marlon Brando, who paired his with faded Levi’s and a scowl in “The Wild One.”

Ironically, some motorcycle-jacket fetishists question whether Brando’s jacket was authentic — Schott maintains that it was — but the widespread assumption that Brando did wear one is a tribute to the power of the Perfecto, a brand that, like Kleenex and Hula Hoops, has become synonymous with the product it manufactures. “By the early ’80s every Japanese kid wished to get it,” according to Rin Tanaka, the author of last December’s “Schott: 100 Years of an American Original” (Cycleman Books), who grew up in Japan. “It was as iconic as Jack Daniels or Marvel Comics or Coors beer.”

Tanaka’s book was just the first of several centennial-related celebrations for the Schott. This weekend, the family-owned company will open a flagship store in NoLIta at 236 Elizabeth Street — less than a mile from 23 East Broadway, where Irving and Jack Schott began making raincoats in a basement factory in 1913. The opening will be accompanied by an exhibit at 201 Mulberry Street of vintage Schott jackets, including Perfectos painted on by Keith Haring and Jean-Michel Basquiat, as well as custom Perfectos designed by Shepard Fairey, Curtis Kulig and Juliana Lazzaro.

“We kind of backed into the Keith Haring jackets,” said Jason Schott, the company’s C.O.O. and the great-grandson of its co-founder, who contacted the Haring Foundation several years ago about another matter. “They said, ‘We have a jacket here that Keith painted on.’ I asked them to check the label, and sure enough, it was a Schott. They’ve since found four Schott jackets that were Keith’s.”

Schott professed not to worry that heritage brands like his, so popular in recent years, might fall by the wayside. “Trends are going to change,” he said, “but heritage will never go away. We’re still producing everything here in America. The ‘Made in America’ movement is growing stronger.” 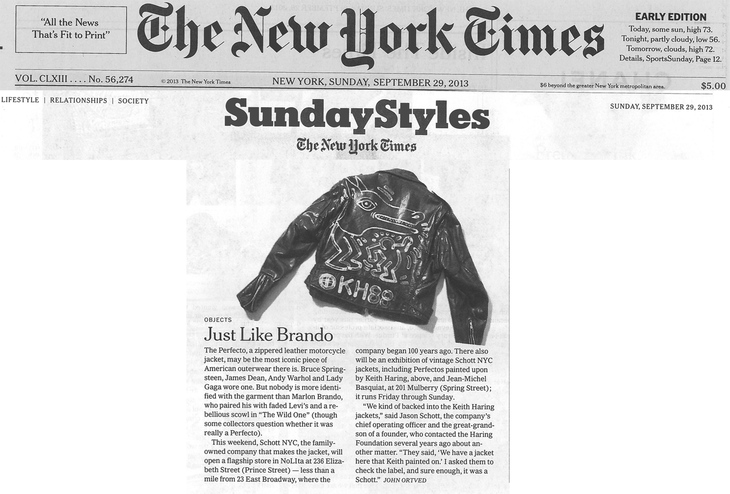