Click here to watch the film and see the story

The company behind the leather jacket sported by rock icons from James Dean to Bruce Springsteen all started out of a basement in New York City in 1913.

A century ago, Irving and Jack Schott began selling raincoats made on Manhattan's Lower East Side. Today, Schott N.Y.C. has grown into a globally recognized outerwear brand that continues to be worn by stars like Rihanna and Jay-Z.

While the company operates four stores in Japan, one in Paris, and plans to open a store in New York this fall, Schott N.Y.C. still handcrafts most of its products right here in America and is still family-owned.

"I grew up loading trucks and sweeping floors and coming in with my mother and my father," said Jason Schott, the chief operating officer of Schott N.Y.C.

Schott is the great-grandson of Irving, his mother is the company's president and his uncle is the CEO. He plans to hand down the company to his children someday.

Though Schott N.Y.C. has always sold a variety of outerwear, including flight jackets and pea coats, they're most known for their "Perfecto" leather jacket with its signature asymmetrical zip.

The "Perfecto" was adopted by motorcycle riders in the 1920s because it kept the wind out and didn't bunch up. But the jacket's status was sealed in the 1950s when a young actor named Marlon Brando wore it in the movie "The Wild Ones." After that, some school systems went so far as to ban the jackets because they were associated with hoodlums.

By the 1970s, the brand had become closely tied to some of music's biggest stars.

"It just became the punk rock uniform," said Schott, noting that the Ramones were known to have worn Schott jackets on stage when they performed.

Today, Schott jackets are still sported by celebrities ranging from Jay-Z to Lady Gaga. Schott credits the company's continued success in part to its strong association with Americana -- both at home and abroad -- and his family's own active role in operations.

"We definitely enjoy getting out there and getting involved with the production process," Schott said. "We're willing to get in there and get our hands dirty with the employees and make sure that they understand we wouldn't ask them to do anything that we're not willing to do."

It's a tradition Schott says he plans to pass down to the next generation.

"My biggest goal for the company is just to continue to maintain our identity, to grow and to have a stronger company to pass on to my children when I'm ready to retire a long time from now," Schott said. 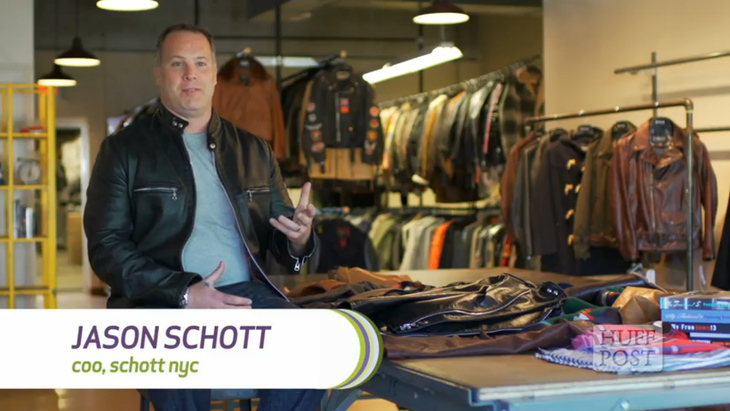