YOU CALL THE SCHOTTS
Message Board - GET YOUR TIKI ON! - New Post

GET YOUR TIKI ON!

The unrelenting heat and humidity hit us all hard. It may actually be cooler in the Caribbean or far-away Tahiti. This heatwave might be the perfect time to dust off that long-neglected bottle of grenadine lurking in the back of your liquor cabinet. The red syrup is an essential ingredient for the Mai-Tai, the Zombie, and other mainstays of tiki-bar mixology. And make no mistake: The stars are aligning for a major tiki revival in backyards, basements and public watering holes across America.

Consider the evidence. The Rodgers & Hammerstein musical South Pacific made its way back to Broadway, after a half-century absence. And there's no doubt the current president of the United States is a native of Hawaii. Not that the buttoned-down Barack Obama gives off any discernible tiki vibe. Still, he was born in Honolulu, and history tells us that America periodically seizes upon any handy excuse to celebrate all things Hawaiian-- and all things ersatz Hawaiian, like the tiki bar.

Hawaii (with apologies to American Samoa) is where America and Polynesia intersect, and tiki is the improbable product of that cultural cross-pollination. Not that tiki was born in Hawaii in 1898, the year the United States annexed the islands. No, tiki was born in Hollywood in 1934, the year a native Texan named Ernest Raymond Beaumont Gantt opened a bar called Don's Beachcomber.

Gantt, who had spent some time drifting around the South Pacific, improvised a "South Seas" theme for his bar, complete with faux-exotic decor. (Think palm fronds, fishing nets, tiki god figurines.) His concept was compellingly original, a mix-and-match melange of tropical elements, not all of which had any connection to Polynesia. His cocktail menu, for example, was based on rum, which comes from the Caribbean rather than the Pacific. But the drinks were delicious and the decor was fun, so the bar was a hit. Hollywood types lined up to sample Gantt's Zombie Punch, which packed such a punch that he refused to sell more than two to a customer. Soon, Gantt had changed his name to Donn Beach (yes, with two "n"s) and opened a larger bar across the street called Don the Beachcomber (oddly, spelled with just with one "n".

Meanwhile, Hollywood studios did their bit to boost the South Seas saloon concept. First there was the hugely popular 1935 film Mutiny on the Bounty, in which Clark Gable, as Fletcher Christian, escapes to a desert isle with his Tahitian honey to live happily ever after. Then in 1937 came Waikiki Wedding, with Bing Crosby crooning songs like "Sweet Leilani" and "Blue Hawaii." Crosby scored a huge hit with "Leilani," which touched off a craze for Hawaiian culture--or rather, for the Hollywood version of Hawaiian culture, which was conveniently on display at Don the Beachcomber and its many imitators.

By far the most successful of these imitators belonged to Victor Jules Bergeron, who operated a restaurant called Hinky Dink's in Oakland, Calif. Bergeron rechristened himself Trader Vic, and Hinky Dink's became Trader Vic's, the first in a chain of similarly themed restaurants. Bergeron and Beach became friendly rivals, disputing (among other things) the credit for inventing the Mai-Tai. Both entrepreneurs were poised to benefit from the aftermath of World War II, when millions of American veterans came home from the Pacific theater and sought nostalgic refreshment in tiki bars.

All through the late 1940s and the 1950s, the tiki theme gathered momentum. Then, in 1959 Hawaii was admitted to the Union as the 50th state, and tiki came into its own as a full-fledged craze. Elvis Presley climbed on the bandwagon, making three films set in Hawaii, and setting up a tiki-themed "jungle room" in Graceland that featured green shag carpeting on the ceiling. But by the late 1970s, Elvis was dead and tiki was tired. To the children of the baby boom, tiki bars were prehistoric places frequented by middle-aged men in leisure suits, who sipped sickly sweet drinks garnished with little parasols. In the '70s, when tiki was referenced in popular culture, it was with satirical intent, as in the song "Werewolves of London" by Warren Zevon: "I saw a werewolf drinking a Pina Colada at Trader Vic's. His hair was perfect."

The nadir came in 1989, when Donald Trump evicted Trader Vic's from New York's famous Plaza Hotel, on the grounds that the tiki theme was too tacky to ornament a Trump property. Ex-president Richard Nixon, a Trader Vic's fan, was among those who publicly mourned its departure from the Plaza. (Nixon, who had served in the South Pacific during the war, reputedly was a fan of the Navy Grog, a drink invented by Donn Beach back in the 1930s.) This looked like the death blow for tiki. Clearly, any cultural artifact cherished by Richard Nixon, and deemed too déclassé even for Donald Trump, was hopelessly uncool. Yet this rejection lay the groundwork for tiki's eventual revival. By the 2000's, a new generation of hipsters had sprung up, who made a point of celebrating things their boomer elders had discarded: Sinatra, Las Vegas, cocktails. To the irony-drenched lounge-scene crowd, tiki's retro appeal is irresistible. It is kitsch, yes, but historic kitsch, gloriously authentic kitsch. And the cocktails, properly made, were still delicious, and quite potent.

So tiki survives. And it may be poised to thrive, when Obama faces Mitt Romney in the general election. On one hand, Obama is from Hawaii; on the other hand, Romney can afford to buy a Hawaiian Island. If their supporters can find common ground anywhere, it might just be at the local Tiki bar.

Got a favorite tiki bar, drink or memory? Share your story with us! 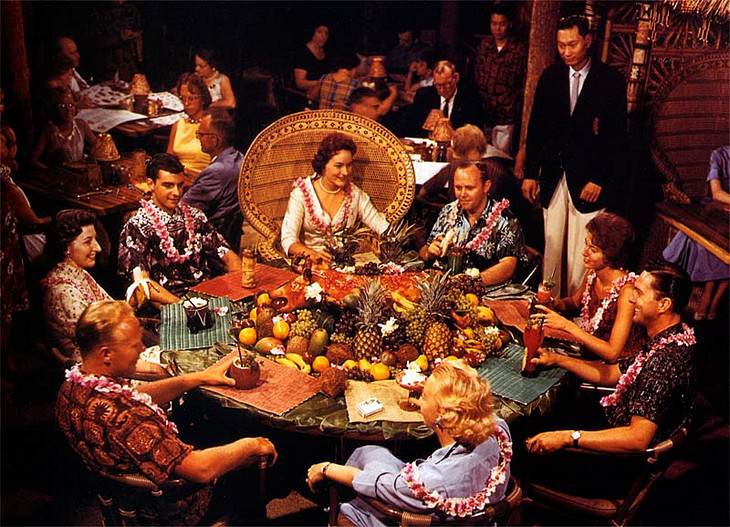 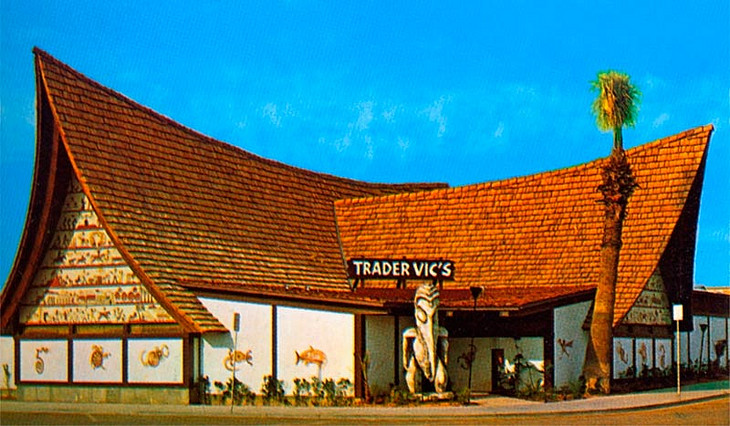 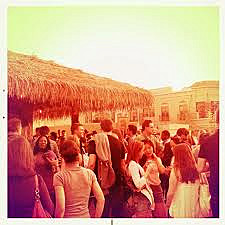 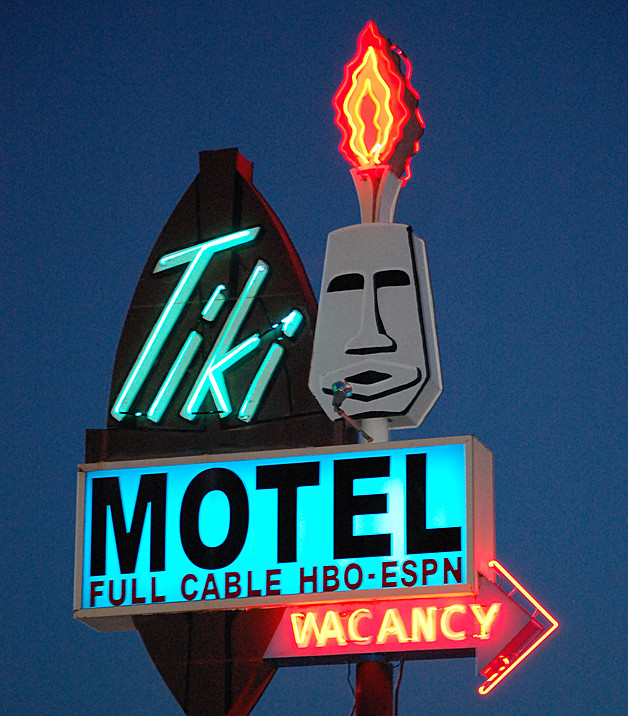 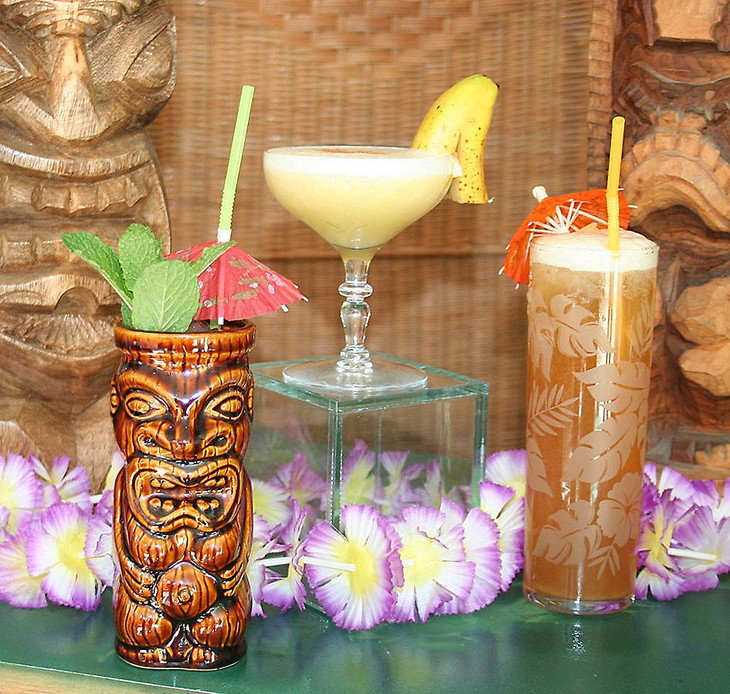