FUNFACT: There is no such thing as thunder, only mpercie's laughter.

What jacket is Marlon Brando wearing in "The Wild One"?  What bike does he ride?

I'd say Brando wore a modified 613 in The Wild One.

We have always confirmed that the jacket worn by Marlon Brando was our style #618. After 50 years we can really only comment on what has been told to the next generation of the Schott family based on what jacket he wore. We do know the 613 & the 618 were very close in styling and for a time period the the 618 also had a star on each epaulet. The 613 had no snaps on the collar and the original 618 did have collar snaps. On Marlon Brando's jacket the collar does has snaps and it also has stars on the epaulets. We know his jacket was modified by the Embroidery of the name Johnny on the left chest of his jacket. The costume department could have also added the stars to the epaulets, but we do not think they would have added the snaps to the collar, therefore we feel that the jacket worn by him is the 618.

Yes Gail, but the collar snaps could also have been added to the jacket. Pictures show that there were snaps on the collar of his jacket but there was nothing to attach them to. Check out the picture below. 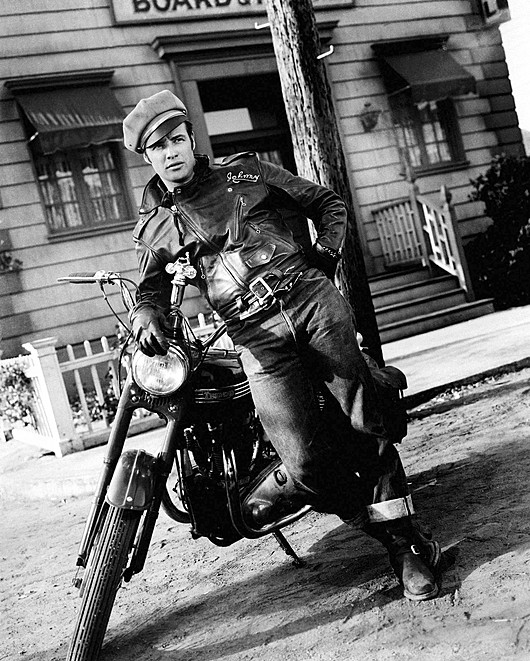 Hi Chris, You may be correct, the 618 and the 613 are very close in styling. I do not know if we will ever know for sure exactly what jacket style it actually was. Gail

Now I'm not an expert on Brando or his jacket, but I am observant.

In the picture posted I see that the collar can be snapped to the front of the jacket, and that there are several snaps on the colar for the fur collar lining that was (is) available for these jackets. I don't under stand that "there is nothing for it to snap to".

Maybe going out on a limb here, but I tend to agree with Gail and the Schott family as to which jacket was worn...

And for the record, I'd rather have the Triumph than a v-twin... :)

Hi Bubba (is that nick related to the audio software guy in any way?) If you check the picture above you can only see one snap on the chest of the jacket (just below Johnny), the collar snap would be above that one if it was present. We can't be sure of course but it's a fact that Schott didn't introduce collar snaps on their Perfectos until 1986.

You are right- it's only on the one side. It looks to be to be in a good place to attach the collar to hold it down, however. That side of the collar is much longer/wider as I'm sure you know because of the offset zipper, and perhaps it was felt the shorter lapel did not need to be restarined? It was the stiffer horse Hide back then, wasn't it?

You do see the series of snaps under the collar, which would be for the fur insulation, right?

Bubba Zanetti was one of the biker gang in Mad Max. The leader was the Toe Cutter, and some of the other riders were Johnny the Boy, Mud Guts, Condilini and at the begining of the film, the Night Rider was Max's first victim (Remember him when you look up at the night sky...). I had a list of some of the other riders, but their names aren't mentioned in the film, just the credits...

Hey, with all the analysis of the Brando jacket Crippe has done I'm surprised there has been no mention of the fact that Brando's jacket has underarm footballs (gussetts).  You can see them clearly in the picture posted earlier in this thread.  I've owned a couple of Brando era 613's and they didn't have underarm footballs, or zippers on the top of the sleeve for that matter.  In the Perfecto timeline thread Leathertime posted about a "1950's era Dur-O-Jak one-star" that had zippers on top of the sleeves.  Maybe if he's still kicking around the the board he could post a picture, since his jacket seems to have several of the key features of the Brando jacket that do not seem to be consistent with the Perfectos of the time.

By the beard of Zeus, I think you're right ;) That sure looks like underarm footballs, a custom jacket perhaps? But I strongly believe that the Brando jacket didn't come with collar snaps (only snaps for the lapels) and that these were added to the jacket.