FUNFACT: Scottie can kill two stones with one bird.

Gail or any knowledgable Schott historian,

I have a vintage jacket that I received from my father-in-law, which he bought in the early 50's, and it is what the cycle cops used at the time.  The styling is very similar to a Perfecto, and of a nice heavy leather.  While it has seen better days, it is still very useable.

The tag says it is by Kurland Star Sportswear, out of Massachusetts.  I'm curious:  given the age of the jacket, and where it was made, was there any relationship between Kurland and Schott back then, or is this just another biker jacket from that era?

Hi Scott. I did a quick search and found an obituary from the Boston Globe in 1993. It reads," A funeral service will be held today for James Kurland of Swampscott, the former owner of Star Sportswear Manufacturing Co., who died Tuesday of heart failure in Salem Hospital. He was 84. Mr. Kurland was born in Boston. He graduated from Boston University and Northeastern University School of Law. He was the co-owner of Star Sportswear Manufacturing Co. in Lynn, a firm founded by his late father in the 1920s, until 1968 when the company was sold...

Over the years, a lot of companies have copied the iconic Perfecto. Could you post a picture of your vintage jacket?

I saw that obit, too.  When I get a chance in the next couple of days, I'll add a picture of it.  Could be that this is a copy of a Perfecto, but it's a pretty nice heavy jacket, and so was wondering if it could have been possibly been made for Kurland by Schott.  My father-in-law said he got it new in 1952.

Here are some pictures: 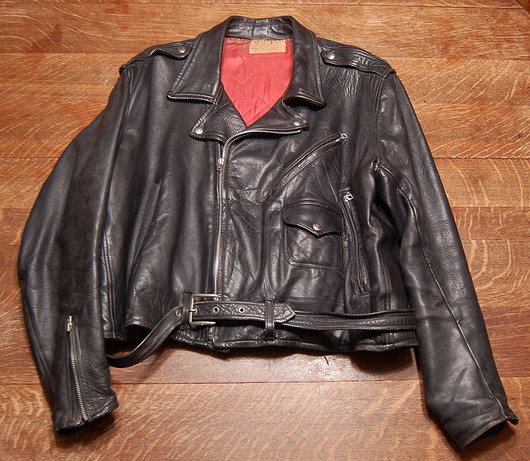 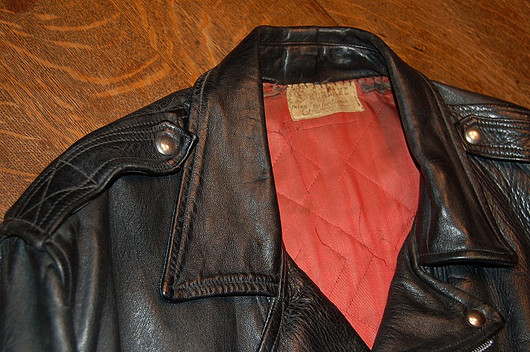 I know that the owners of this forum would probably rather not have a picture of a non-Schott product here, but hopefully we can learn some history, if nothing else!

Scott, We do not have records from the 1950's of what reatilers we sold or what companies we made jackets for under their label. Looking at the jacket though the belt is very narrow on the jacket , much too narrow for the size of the buckle. The small pocket on this jacket is a patch pocket, where as our change pocket is just a  pocket flap exposed pocket. Our belt and and the center bar bar buckle we have used on the classic Perfecto are much different. I would think if we made these jacket's under a private label we would have kept the classic look of the jacket. I do not think we were the manufacturers of this jacket. Gail

Thanks so much for looking at it.

It is definitely a slightly different construction from your Perfecto, but had just wondered if that was customizing done for the order.  You're right, the pocket is different as is the stitching on the epaulettes.  I believe the belt is original as it is sewn in very cleanly, but that wrong-size buckle has to be a replacement.

I was just curious if you knew anything, and thanks again for looking!