FUNFACT: The X-Men get up every Saturday Morning to watch wolverine.

I really enjoy reading over your responses to various vintage questions from dedicated Schott fans.  My questions revolve around the 1928 models.  Currently you have a limited edition 1928 in naked cowhide.  What was your production run total on this jacket ?

You also produced a limited number of the model 1928 in horsehide for an overseas customer(I am fortunate to own #072 in size 42).  How many jackets were produced during this run?  What sizes were included?  What year were they made?
This jacket is a bit different than your limited edition 1928 in naked leather, open zipper cuffs in front of sleeve, single button closure on top of collar and no outside zipper pocket on right.  Which version is more like the original model 1928?  Do you have any pictures of an original 1928?

I realize there are about ten questions in this post, please take your time with this one and thanks in advance for your patience with all of these crazy and sometimes redundant questions.

In 1928 this first motorcycle styled jacket was produced in 2 versions the cowhide and the horsehide jacket with the slight variations in the style from the cowhide style. Both jackets are original styles of the jackets offered in 1928. Gail

I'm glad that you took the time to thank Gail for her efforts to respond for all of the questions posted on here.  You guys definitely challenge her, but she is up to the task of answering most of your questions.

For some reason I was unable to post the images of our original 1928, but there is an excellent shot of it in Rin Tinaka's book entitled "Motorcycle Jackets: Ultimate Biker's Fashions".  I will post a pic here when I am able.

Thanks for your quick responses to my questions on the 1928/1928H.  I had no idea that there were two different 1928s, I sort of thought that all the jackets back then were made with horsehide.  The flood gates have now been officially opened on requests for yet another jacket for Schott Bros. to reintroduce in horsehide!!

Look forward to seeing your pictures of the original 1928...s?  With all of the great vintage pictures you already have on your website maybe you could add in a few more featuring your 1928.  I looked for quite a while on the web and could not find anything on this vintage style from the late 20's.   Any ideas on how many were made back then?

Unfortunately after 78 years we no longer have the records of how many jackets were produced in 1928. In those days records were kept on paper and after several years when no longer needed were discarded. Who knew that one day this information would be needed. Thankfully in today's world we now have computers and each of our jackets are ticketed with a series of numbers that we can now determine when a jacket was produced. In future years as long as this ticket is not removed from the pocket we will be able to determine the age of the jacket by the year it was made. In reference to the original motorcycle jacket made by Schott, we all know it must have been a big success and in great demand back in the late 1920's, because look what our jacket represents today, they are still very much in demand 78 years later.

As promised, here is a picture of one of the original 1928's, along with a picture of the box in which it came.  As you can see, the box was a "Perfecto" box, as this was the brand name used by Schott at the time.  My great grandfather Irving couldn't imagine that anyone would care if his name was on the jacket.  He just worried about making the jackets. 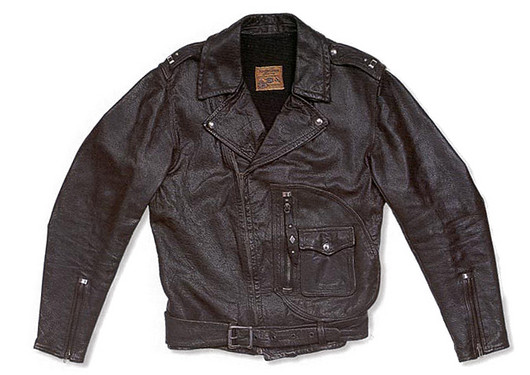 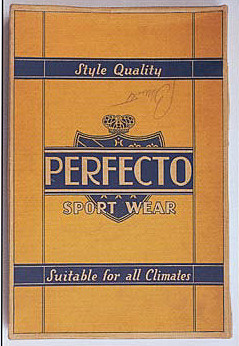 That photo is of a Beck Northeaster 333. If you look close you can see the Beck label present.

This is a original production jacket from 1928, which we made for Beck Northeaster. The jacket was designed and produced by Schott and also produced under their private label. The jacket pictured is 78 years old and is the jacket we have in our archives, unfortunately we do not have a original 1928 jacket with the Schott label. As you can imagine after all these years it is difficult to find this jacket, but we did find this one with the Beck Label. Gail

So the Beck Northeaster 333 actually was introduced in 1928? Somewhere else in the blog section someone said it was first offered in 1941. Life is so confusing!

Thanks Miles for picking up the fact that the older jacket is in fact a Beck 333.  Anyone who owns an original perfecto 1928 in either the cow or horsehide is sitting on a goldmine...the original Beck 333's are going for 1,000 to 1,500 on e-bay and I think the Perfecto labled jackets are even rarer.  If you go to the legendary site and get into their "horsehide collection" they have a Beck 333 reproduction that gives a brief history on the partnership Schott and Beck formed at the time.  You may also want to pick up one of these jackets, Schott only made 100 of them which is their minimum production run and there are already several smaller sizes that are sold out.  I just ordered a 44 and should get it by Saturday!!!!

If anyone out there has an original Schott 1928 in either the cow or horse, please take some pictures of it and post them to this blog so schott fans can check it out.

I sold a Beck 333 on eBay a few weeks back. Size 34, destroyed lining, and missing half the belt but it still was hit for over a grand. The Japanese are CRAZY for them.

I've never seen a vintage 333-style jacket with an actual Perfecto tag but would love to if anyone out there has one and can photograph it. I have seen a tagged Perfecto jacket that I can definitely carbon-date as early/mid 1930's by the very early Talon zippers, but it was configured much more like a multi-zippered one-star "Brando" jacket as opposed to the unbusy d-pocket style of the 333. I was under the impression that the 333 design was inspired by a late 20's early 30's Leathertogs jacket.

The Beck 333 jacket that we produced for Beck did not have a Perfecto or Schott label in them. This was a private label we made for Beck. Gail

The style 1928 is the first motorcycle jacket produced. The jacket is labeled with our Perfecto label. I know under one of the posting on this blog, Jason has posted a photo of the original jacket. Gail

One thing my brother noticed about his prototype Schott 75 Anniversary Perfecto jacket is that it says "Suitable for all climates" (like the original 1928's had in them) instead of the production ones that went to the public that read "Made by Schott NYC".

Any thoughts on this Gail? If the original one had "Sutiable for all climates", why wasn't this put into the production ones to the public to make it "authentic"?

A prototype is a jacket that is a sample and changes do get made on the jacket before production is started, sizng and trims to get changed. I know we had some sample labels here of this Perfecto type label when the samples were being made. One was larger and I do not even have a label here to check what was written on it. The decision was made to use the label Made by Schott USA. Gail